How moving unused or rarely used files from Dropbox's hot storage to deepfreeze.io's cold storage reduced my storage costs and made my Dropbox account more manageable.

I'm a big Dropbox fan. I use Dropbox as my virtual filesystem where I put all my files: Photos, presentations, ebooks, videos, my old podcasts, by blog backups, everything is there, and that's why I'm paying for a 200GB account.

I like the connivance, I like that when a file is in Dropbox it's accessible on all my devices, and the Web, and that so many apps work nicely with it.

As expected, I'm running out of space: I'm using 195GB of 206GB total. So, I would probably have to upgrade to the next, 500GB plan, which costs $300 more than my current plan -and my budget is really, really tight this last year. Plus, my current computer is a MacBook Pro with a 251GB SSD. I would have to disable full syncing, but if I do so, most of the advantages of using Dropbox are gone.

To be honest, I've already stopped syncing all my Dropbox folders to my laptop, and I use "selective sync" that allows you to only sync some of your Dropbox folders.

The truth is I have lots of files in Dropbox that I don't really need. Old projects and presentations and research materials from years ago, digital copies of old computer magazines I keep for the record, backups of my blog and my old websites -files I may never need but I'd hate to throw away, and files I will probably need only years later.

So why keep them in Dropbox and occupy valuable storage space? I could make local copies and remove them from Dropbox, but I consider local copies extremely vulnerable, unless you go the extra mile (which is actually lots of miles) to set up RAID arrays, backups, etc.

Instead, I moved them to deepfreeze.io.

(Disclaimer: I'm the founder of Longaccess, the company that created deepfreeze.io)

Moving files from Dropbox to deepfreeze.io is easy and fast (the transfer is done between the Dropbox and deepfreeze.io servers), which is extremely convenient when you have to move tens of gigabytes. The storage cost is much lower compared to Dropbox ($15/100GB/year). I can restore my files back to Dropbox when I need them, or download them as a ZIP file.

The only drawback is that files are not immediately accessible and I will have to request them a couple of hours before I need them. But that's a fair compromise, given that it will be probably years before (if ever for some) I need them.

So, now I have freed about 40GB from my Dropbox account. Sweet. 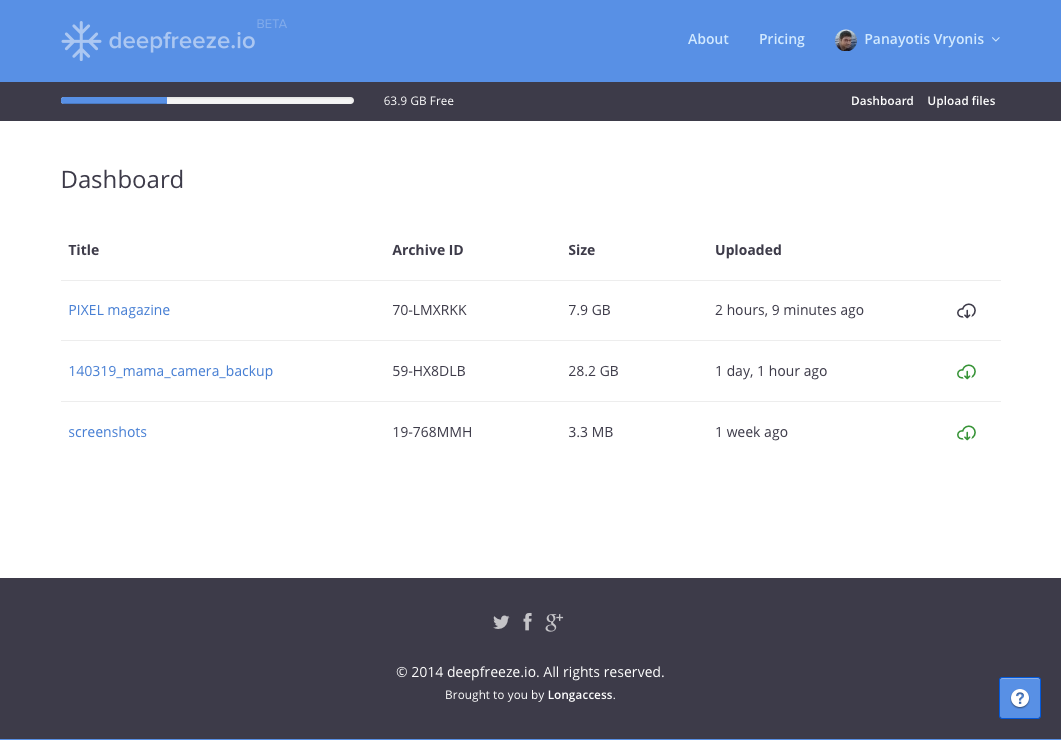 If you'd like to try deepfreeze.io while in Beta, you will have to ask for an invite here. Users that get invites while in Beta, will also get 100GB free for one year.