Bitcoin ATM at The Cube Athens

Using the Bitcoin ATM at The Cube Athens to buy Bitcoin with cash.

Yesterday, I tried the Bitcoin ATM located at The Cube Athens. It's like a ATM where you can insert Euro bills and buy Bitcoin, or use Bitcoin to buy Euros (I didn't try the second one).

So, I entered 3x20Euro bills and got a Bitcoin paper wallet that looks like this:

I should be able to scan the QR code with a Bitcoin wallet app and transfer the Bitcoins to my wallet. I tried to do it using the Coinbase app but it did not work. Probably something that had to do with the Coinbase app, but I'm not sure. Stavros told me he had no problem with other apps, like Blockchain, but I just used the somehow hidden (I only found the URL at a forum) Import private keys function, I typed the private key, and... done. My bitcoins are in Coinbase.

Later, I tried scanning the same paper wallet with the Blockchain app and it worked just fine, but of course getting the bitcoins out of the wallet twice did not work :-) (A paper wallet can only be used once.) 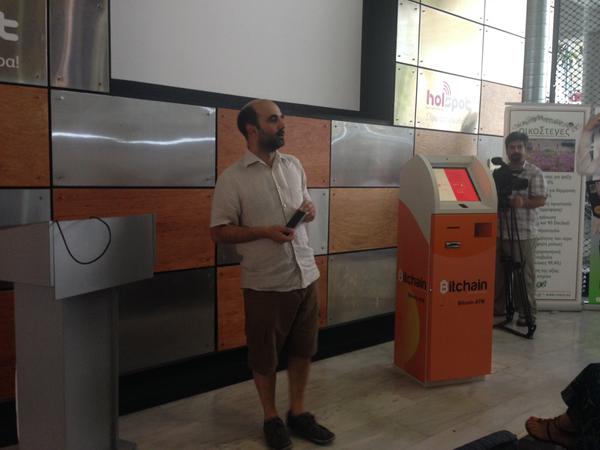 (*) photo by @taniakaras, taken at the presentation of Bitcoin ATM at the Cube, some days ago.