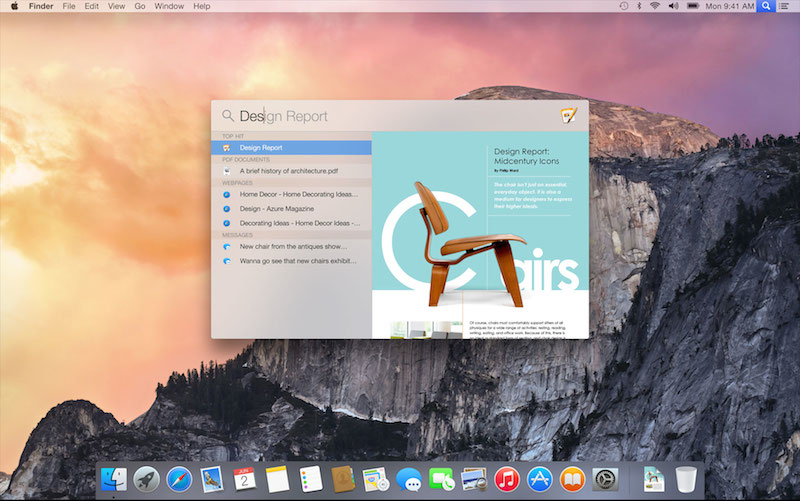 Spotlight. Now brighter than ever. The fastest way to find things on your Mac keeps getting better. […] It’s great for looking up information from sources like Wikipedia, Bing, news, Maps, movies, and more. […] —OS X Yosemite, coming this fall.

Almost anyone in the tech industry noticed: This is Google’s front yard. Every search done in Spotlight is a search Google won’t have the opportunity to monetise. And most said "Apple drops Google for Bing".

But it could be bigger than this.

Common wisdom says that if you wanted to compete with Google, you would have to build something like Google, but better —technically or functionally better, or even better from a certain perspective like privacy. Given Google’s scale, technical competence, available resources and years of expertise, building a search engine that follows Google’s model and would be even comparable with it seemed like a Quixotic quest. Even for someone as big as Apple —I mean, Microsoft has been trying for years, and they are still far behind.

But it looks like Apple is taking a different approach. Instead of a centralised engine, they are doing a federated one: The new Spotlight will be a broker for various information sources, not just search engines.

OK, that’s far from a novel approach. All search engines make agreements to get information from third parties without going through the default route of crawling web pages. And OpenSearch (originally developed by Amazon’s A9) has provided the protocols (and in some cases, the infrastructure) to do federated search for (if I remember correctly) more than a decade.

However, Apple is uniquely positioned to push forward a federated search model. Not because of their technological capabilities or available resources (the value of each one of them can’t be undermined), but because they are phenomenally good at creating marketplaces.

Of course, a federated search model will need a better raison d’etre than to undermine Google’s power: Revenue is almost always a good one. What if Apple managed to put together and popularised a “Search Store” (after App Store), where users could subscribe or purchase information sources that will be available to them through Spotlight [*]?

Users could even be able to decide what kind of information they provide to each one of them and act as a VRM tool: Only send my location to the restaurant recommendation engine I like, send my account info to my kid’s school “search”, use my twitter account id to search my friends’ twitter stream, be completely anonymous when queries are sent to an adult search site, etc. Even a simple permissions model, after the one used by mobile apps, would be a huge leap forward compared to the total lack of control we have today.

Some may say that search has been commoditised and nobody would pay for it. I’m not sure. Apple has proven more than once that they are extremely good at adding value to products and services that are considered as commodities and sell them for real money. I have no data to back this up, but I’m sure that there are thousands, if not millions of small and bigger information providers specialised in verticals that struggle to make a living out of ads with extremely low CPM, that would be happy to participate in such a marketplace with prices much lower that $1/year.

And given that Google is considered by a relatively small but growing number of users as a threat to their privacy and their power to control their online identity, demand for an alternative to ad supported search may not be as low as many think.

I’m just speculating here. It may well be a bad idea, something that would never work, or something that Apple wouldn’t be interested in pursuing. But it doesn’t sound so wild to me.

This article was also posted on Medium.

[*] And Siri. Let’s put this aside for now, but it’s also an important part of the whole image.