It's probably the most valuable thing we will carry with us for the years to come -and something we would definately want to pass on to her when she's old enough to understand. 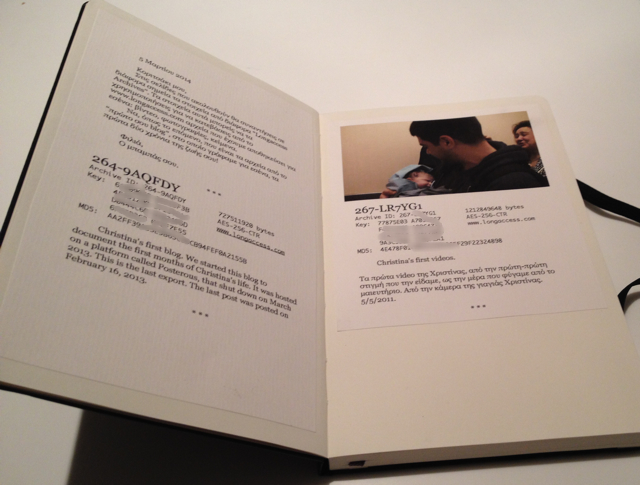 So, back in 2010, when my wife was still pregnant, we started a “private” blog on Posterous.com where we posted our thoughts, photos and videos. We shared the blog address and the password with a few close friends and family members as a way to privately share with them. But we always had in mind that our daughter Christina would read it one day: It was our way of talking to her sometime in the future.

Unfortunately, Posterous.com was shut down in 2013, after the company was aquired by Twitter. We were left with an export of everything we had posted, which I kept moving around, together with the rest of my important (and not so important) files, from computer to computer, from backup to backup, and so on.

In the meantime, we had much more than the blog archive. A new parent with a smartphone is an archiving machine: the first time she stood up, the first word she said, her first Christmas, her first this, her second that, we have photos, videos, small texts, audio recordings of almost everything! It's our, and our daughter's, precious digital archive.

Preserving it long enough is quite a challenge and I'm enough of a geek to both love digital and also to know that chances are that in 20 or 30 years from now, my daughter will only find what we've put on paper.

So, I decided to go for something unusual: a real scrapbook with digital content embedded in it.

Now this may sound weird: How does one embed digital content in a scrapbook? But I've actually spent more than a year working on it as the founder of Longaccess, a long-term digital preservation service. (And if you've read this far, you may be interested in “Why we started Longaccess”.)

First I uploaded the Posterous export to longaccess.com -I experienced a short moment of panic when I looked for it and thought I'd deleted it, but luckily, this was not the case. I did not print the generated Certificate which looks something like this. Instead, I copied and pasted the information in my own template (nothing fancier than a Word document formated to my likes) and then printed it.

I did the same with Christina's first videos. (“Grandma Christina” was there, at the hospital, shooting video from the very first moment I saw my daughter and hold her in my arms.)

I picked some of the photos and texts and printed them too. Then, I pasted everything in my daughter's little scrapbook. These are the first pages, I will be soon adding more to it.

I feel that I've found the ideal solution. On one hand, my files are stored at Longaccess and I'll never have to worry about them again: they are encrypted, they can't be deleted, they can't be altered and I've already paid for thirty years of hosting. On the other hand, I have something tangible and beautiful in my hands: a little book that contains everything she'll need to get access to her archive.