How we use Intercom to engage with our users on Twitter.

Intercom.io is full of nice little features and "social profiles" is one of them. Not part of the core product, but at Deepfreeze.io we've found it to be extremely valuable.

Most will think of Intercom's social profiles as way to get a bit more info about their users: Instead of a faceless email, you usually get an avatar and links to the user's profiles on various services, like Twitter, Facebook, Linkedin, etc. Just looking at the profiles helps a lot, and it can be useful if you want to contact the ones who are active on a specific social network --for example, if you add a Linkedin integration to your product, it makes sense to contact users who have a Linkedin profile.

At Deepfreeze.io[1], we wanted to take it a bit further.

While most brands focus on getting followed on Twitter, we are more interested in following our own users: Twitter tends to be a casual place where users share publicly links of interest, casual thoughts and comments, and what they do. Following our users on Twitter gives us a much better understanding on what they are up to, what they care for and what they are interested in. (It also makes it easy for them to send us direct messages if they want to.)

So, we put together a small script that uses Intercom's API to go through our user list and pick the ones that have a Twitter account. Then, using Twitter's API, the same script will follow them on behalf of @deepfreezeio. (Note: both APIs have rate limiting, but being just two months after our initial launch and we only have 10-100 new users per day, so it's easy to avoid hitting these limits.)

Of course, we could have done the same thing by going directly to Full Contact (like Intercom does), but:

And here is an example of how an "anonymous" email, can be turned into a happy customer and a valuable, public conversation about our service.

(OK, ok, we made a typo. Below you should read "your @deepfreezeio invitation is in your mailbox".) 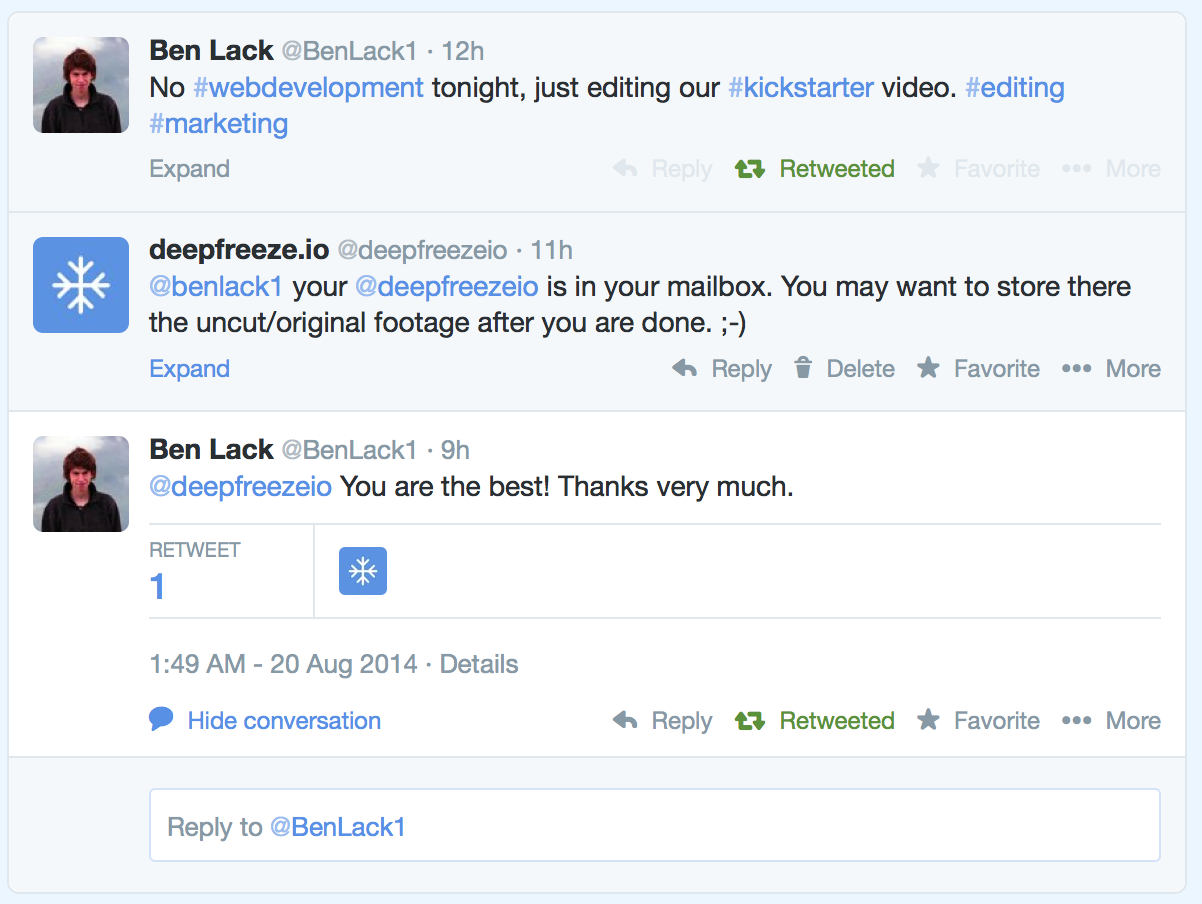 In this case, an email address we knew nothing about is turned into a real person [2] who is working with video and is about to launch a Kickstarter campaign for a new game: Now, this is an insight we wouldn't have otherwise, and one we can built on to offer real value to our user.

Of course, the hard work is not automating the Twitter follows, it's actually engaging with our users in meaningful ways. But thanks to Intercom and a little extra coding, we can focus our resources on the hard part.

[1] Deepfreeze.io is a cloud storage service designed for rarely used files. Request an invite and get 100GB free for one year.

[2] Hey! If you want to know more about the project Ben Lack works on, follow @BenLack1.