If you miss the freedom RSS used to give us before we started relying on Facebook, read on. 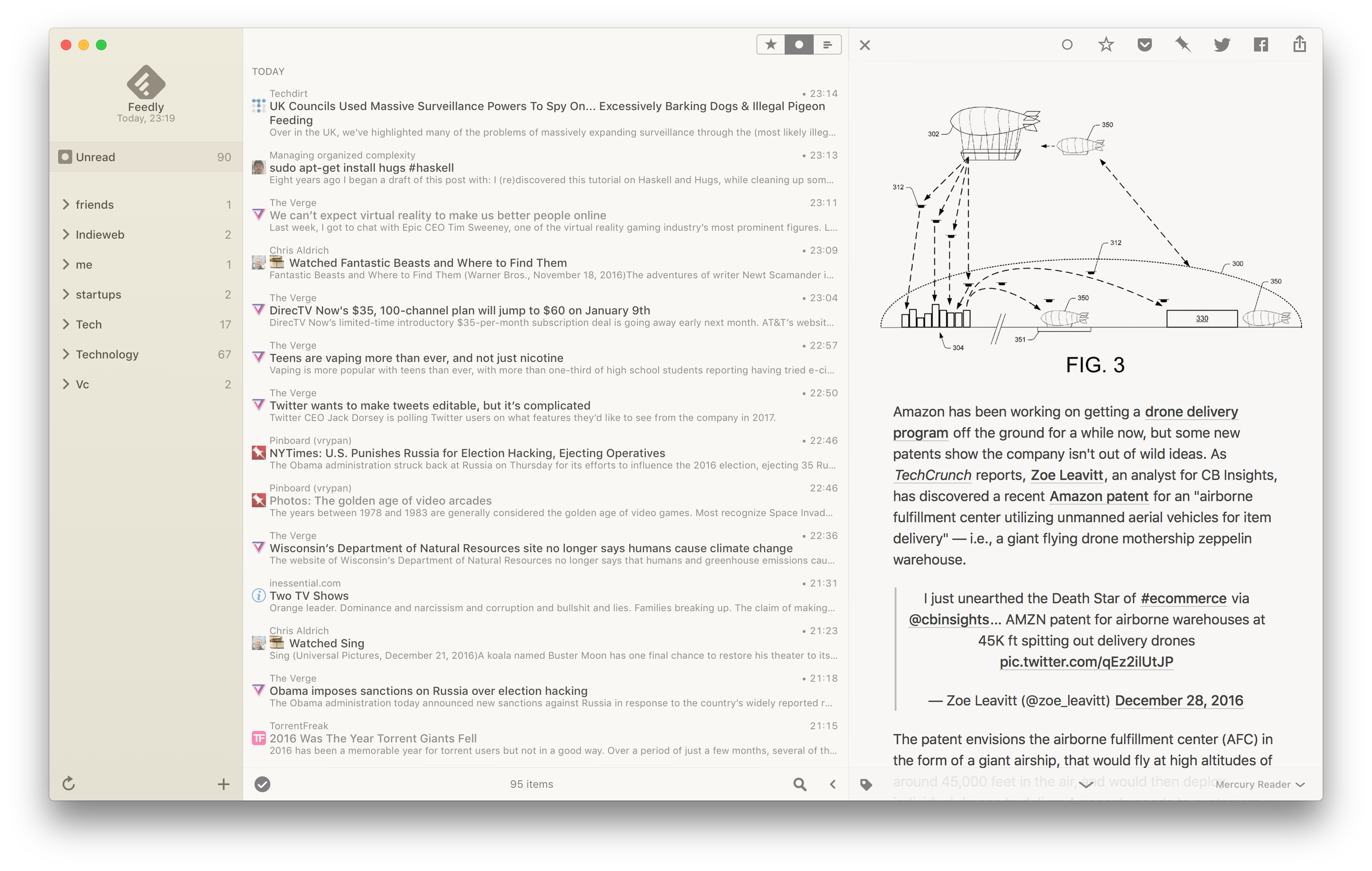 Not so long ago, I used to rely on RSS feeds to get my news and discover interesting things. Now days, RSS feeds have been replaced mostly by Facebook or Twitter. They make it easy to "subscribe" (like, follow, etc.) but then they set their own rules: They decide what to show you and when, they decide how you can interact with posts, they decide how you can search them and how you can reference them. I miss the freedom of RSS, so a few days ago I decided to make the extra effort required, and start using RSS feeds again.

The services and apps I use

I already had my RSS subscriptions in Feedly, since Google Reader (Google, I don't forget you tried to kill RSS!) shut down. So Feedly is my RSS aggregator, and works as a centralised repository of my feeds and also of what I've marked as read and what not.

Reeder (both for macOS and iOS) can sync with Feedly, so the one running on my MacBookPro and the one on my iPhone are synced: when an item is marked as read on one, it will also be shown as read on the other.

I use pinboard for sharing. When I read an item that I like and I would like to share, I send it to Pinboard. Which is great because Pinboard has an RSS feed of my bookmarks, and if you want to see what I like, you can subscribe to it using your RSS reader :-)

(BTW, I've started to realise that Pinboard can be much more, but this will probably be the subject of a separate post).

I used to use Twitter to share links I like (I now do this on Pinboard), but Twitter does not offer an RSS feed and I wanted this time to have a setup that relies on RSS and nothing else.

Each one of the parts mentioned here (Reeder, Pinboard, Feedly) could be replaced by alternatives. That's the beauty of using a standard: I'm not tied to any on single vendor.

My setup is not free. The initial cost was ~$26 and then $11/year after the first year -and probably Reeder will get a new version after some time, and I'll probably buy it too. But it's not expensive either, and I like knowing that I'm making this a viable (I hope!) business that has a good chance of being around in the next years.

One other problem, is that many of the people I like to read no longer publish their thoughts on the open web, but use Facebook which makes it much more difficult to integrate in my RSS workflow. There's little I can do about this other than encourage them to use their blogs again.

My Pinboard page is https://pinboard.in/u:vrypan (RSS)

Which apps and services do you use to read (and publish!) RSS feeds? Leave a comment at the Medium version of this article to let me know. Hints and tips are most welcome!