Putting an old iMac to use

Configuring an old iMac to run pihole, homebridge, and ipfs, using Siri to turn the brightness on/off and using it as a... "LED panel" light.

So, I have this old iMac "Early 2009" Aluminum iMac Core 2 Duo. I decided to make something usefull out of it, so I upgraded the RAM to 8GB, replaced the original HDD with 1TB SSD and installed Ubuntu 20.24.

Important note: Bellow, I describe how I configured autologin and how I changed permissions to /sys/. These are NOT are not good security practices. However, given that the machine is sitting on my desk, and behind a well configured firewall, my assesment was that it is safe for me to do them. Please do your own security assesment.

First stem, was to disable X from starting on boot.

This would be a keyboardless system, so I would like to make sure that tty1 starts with some things on it.

This (creates and) openes file /etc/systemd/system/getty@tty1.service.d/override.conf for editing. I entered:

To enable the service and starts an auto-login session on tty1:

To automatically run some useful stuff on tty1, I added the following lines to $HOME/.profile:

tmuxp.tty1.yaml will start a tmux session with all the panes arranged like I want them and run the corresponding processes in each one of them.

And this is the result: 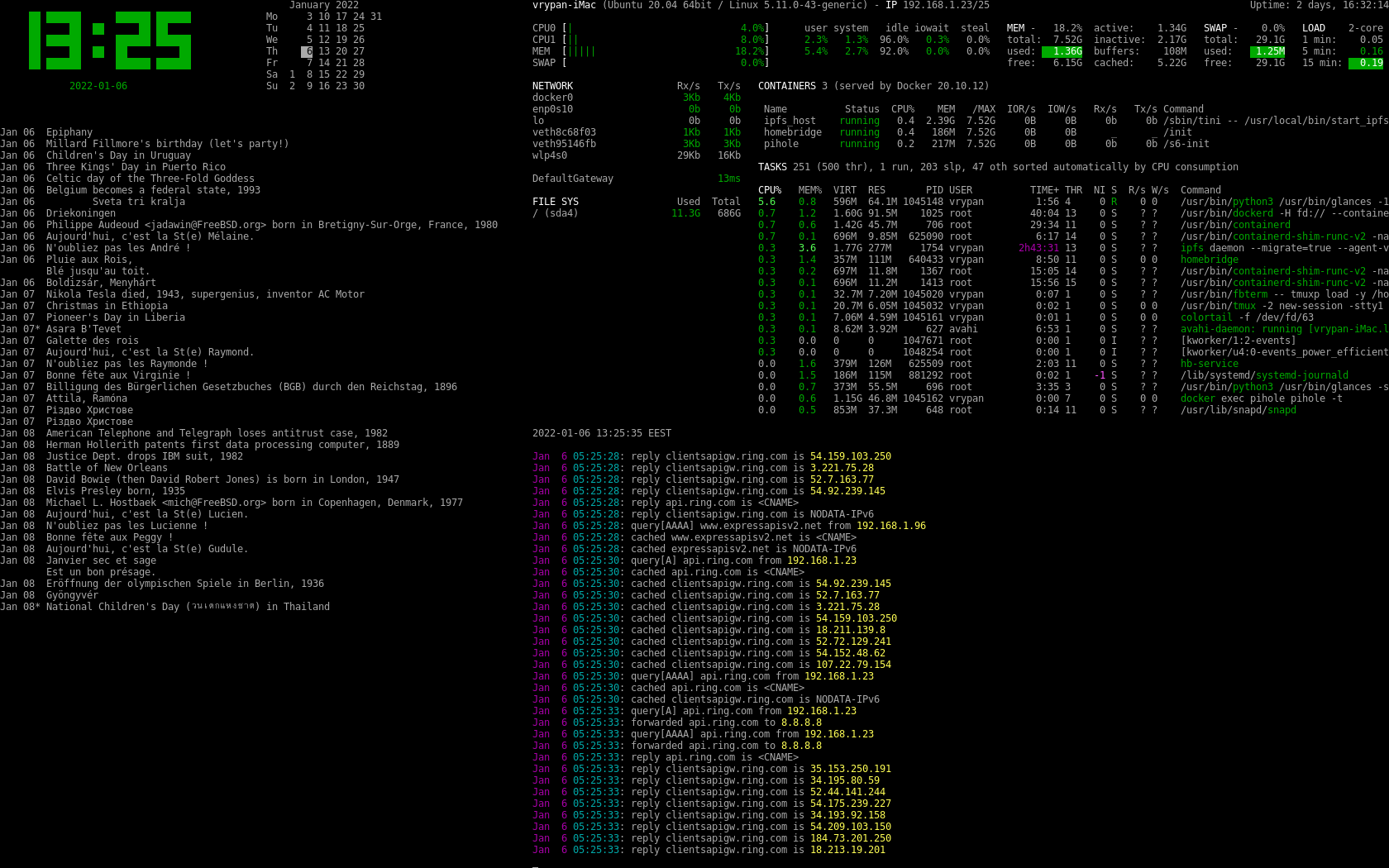 I also installed docker, and then configured a couple of containers (that replaced rasperrypis I used for this purposes):

I also configured syslog-ng to receive logs from my Unifi Dream Machine:

Using the iMac as a (sort of) LED panel light

You may have noticed there is a second tmux window, called ligths_on. I find this kind of cool. It's a window that is all white (tput settab 7 sets the background to white). So I can ssh to this machine, do tmux next -t tty1 and the screen will turn on white.

And since this is placed on my desk, I use it as a light panel (!!!) that makes me look better when I'm on a video call on my laptop. Then tmux next -t tty1 will switch back to my normal "control center" view.

Of course, don't expect a thousand nits from this display. But it makes a difference when there's low light.

Turning on and off the iMac screen using Siri

I don't want my iMac screen to be on all the time. So I use the following over ssh

But since I have already homebridge running, why not use Siri for this?

and I also mount /sys/class/backlight/nv_backlight/ as a rw docker volume, so my docker-compose file looks like this:

Next I installed the homebridge-shell-switch plugin, and configured like this:

Now, I can turn on and off the monitor by saying Hey Siri, turn the monitor off. I can also schedule the monitor to turn off during the night for example, or turn it on/off using the Home.app on my iPhone.